Some years ago the Executive Committee of the International Fund for Saving the Aral Sea (EC-IFAS) was based in Almaty, Kazakhstan. At that time, I, Alfred Diebold, was the Technical Director of EC-IFAS. We wanted to sensitize people, particularly children, with he problems and situation around the Aral Sea. We had a drawing competition organized together with the school in the city of Aralsk. The following are some of their drawings. 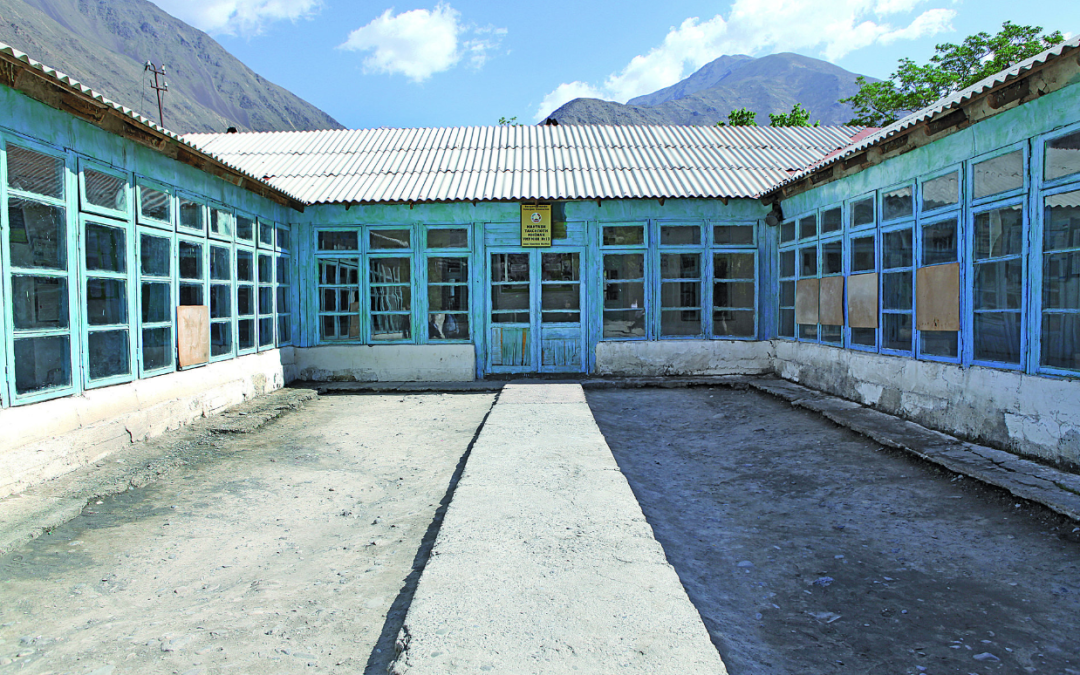 Water usage and water management in the Soviet Union

The Soviet Union continued to realize many of the ambitious plans of the Tsarist period. It financed and constructed more large-scale irrigation networks. Apart from the economic objective of establishing the Soviet Union on the world cotton market, agricultural policies in Central Asia also aimed to develop this poorest region of the Soviet Union. New water infrastructure was critical to supplying the rapidly increasing rural population of the region with the water it required.

As part of a massive land reclamation programme for developing the steppes and deserts into fertile fields, irrigated lands rose from 4.2 million ha in 1950 to 7.4 million ha in 1989. Water consumption for agriculture increased accordingly and the flow of Amu Darya and Syr Darya into the Aral Sea decreased from an average of 56 km³ at the beginning of the 1960s to around 6 km³ in the 1980s.

The reclamation of millions of hectares of additional agricultural and water-intensive cotton cultivation in the downstream republics was only possible with an extended water storage and distribution system. This required massive investments in canals, reservoirs and water pumping stations. In the lowlands, tens of thousands of kilometres of channels were built. Construction of the largest canal, the Karakum in Turkmenistan, started in 1954. It brings water from the Amu Darya at Kerki, Turkmenistan, westward to Mary, Ashgabat and ultimately to the regions close to the Caspian Sea. Other large irrigation structures include the Big Ferghana Canal (built in 1939), the Amu-Bukhara irrigation system, the Karshi Canal, bringing water from the Amu Darya to the Talimarjan reservoir, and water reservoirs like the Tuyamuyun in the Khorezm region, shared by Turkmenistan and Uzbekistan. In some areas, reclamation of new irrigation land was possible only with the installation of pumps, especially in the Uzbek and Tajik SSRs, where they ensure at least part of the water supply to more than 60% of irrigated land.

Also upstream, numerous reservoirs have been built in the mountainous regions to improve the regulation of the rivers for irrigation purposes. The biggest reservoir is the Toktogul reservoir with a storage capacity of 19.5 km³. It is part of Kyrgyzstan’s Naryn-Syr Darya cascade, a system of reservoirs and dams (Toktogul, Kurpsai, Tashkumyr, Shamaldysai, Uch-Kurgan) that regulates the flow of the Naryn River. In Tajikistan, nine operating reservoirs with a total storage capacity of 29 km³ were built. The two biggest ones are Nurek (10.5 km³) at the Vaksh River and Kairakum (4.16 km³) at the Syr Darya. The Nurek dam is the highest dam in the world (300 m).

In order to compensate the two Soviet republics for their losses in arable land and the costs of operation and maintenance of the facilities, a unified water-energy system was established. The reservoirs were constructed and operated primarily for downstream irrigation supply. Only at peak times was water released to produce electricity. In exchange for water withdrawal in the growing period in spring and summer, the downstream states delivered energy in the form of coal and gas in winter. This worked well, as both water and energy were centrally allocated by the government in Moscow.

In the official water governance structure of the Soviet Union, all water resources were controlled by the Union-wide Ministry of Melioration and Water Management (MinVodKhoz). In Central Asia, initially a regional agency (SredAzVodKhoz) was responsible for the whole Aral Sea Basin and also received orders from Moscow. Later, corresponding ministries in the Soviet republics were established, but their responsibilities were mainly restricted to the implementation of the decisions of the central MinVodKhoz in Moscow. The agency pursued an integrated basin-wide water and energy management approach in which each republic fulfilled a particular function. Water allocation was standardized with fixed schedules for republics, provinces and districts. Basin management administrations existed for some small rivers in Central Asia. However, they had a hard time competing with the province administrations, securing water foremost for the fulfilment of their own plans. The central MinVodKhoz itself had many subordinated agencies with overlapping functions and competencies, resulting in inconsistencies and ineffective implementation. It was responsible for planning, supplying, receiving, and controlling, so that all of the relevant water management functions were combined in one agency with minimal external oversight and control. The local water management authorities were also restructured under Soviet rule. During collectivization, all of the small land plots were combined into huge collective and state farms (kolkhoz and sovkhoz), which were in charge of the on-farm irrigation systems.[Bucknall et al. 2003, ISRI, Socinformburo, FES 2004, Obertreis 2011, Sehring 2002, Thurman 2002.]

The Soviet ideology of total human command over nature led to a belief in the ability to exploit natural resources, including water resources, indefinitely. Apart from a relatively low usage fee, water use was not paid for on a quantitative basis. This approach, along with the unclear and competing distribution of competencies among different state agencies, led to an erosion of the local sense of responsibility and a pattern of usage that disregarded the interests of others. The old norms and rules that ensured a relatively high yield with low water consumption eroded and water waste increased drastically.

In the 1970s, the ecological consequences of the massive agricultural expansion began to emerge: the shrinking of the Aral Sea, attendant desertification, the salinization of growing fields, water pollution by fertilizers and pesticides and water shortages in downstream areas. Some scholars in the Central Asian Soviet Republics started to carefully criticize wasteful water usage. The initial response was a perfect example of the Soviet belief in the supremacy of technology over nature. Instead of trying to increase the system’s efficiency, Soviet officials drafted plans to divert water from the north-flowing Siberian rivers Ob and Irtysh southward to Central Asia, where it would be used for irrigation and to refill the Aral Sea. The project enjoyed wide support among Central Asian water officials, but it also faced opposition. The plans were shelved in 1986, not because of the emerging environmental criticism, but because of the high costs. A few years later, after the famous «Aral-88» field mission in 1988[This expedition was organized by two journals and headed by the journalist Grigor I. Reznichenko. Almost 30 journalists, writers and scholars from Moscow and Central Asia, plus a representative of the prosecution and one of the Union-MinVodKhoz travelled through the whole basin for two months. The expedition helped to raise union-wide awareness of the Aral Sea crisis. See Obertreis 2011.], the Soviet government changed its approach and issued a decree on the improvement of the ecological situation in the Aral Sea Basin. It foresaw a reduction of new land reclamation and a reduction of water supply for irrigation areas by 30%. It was met by fierce resistance locally. Finally, the decree ordered only the reduction of water usage per hectare in the Aral Sea Basin by at least 15% by 1990 and by 25% by 2000. However, with the dissolution of the Soviet Union, the decree became obsolete, though the idea of diverting rivers from Siberia continues to be revived from time to time.[Obertreis 2011, Sehring 2002.]

With the growing attention paid to the Aral Sea disaster, increased environmental awareness and glasnost, some institutional changes in water management were introduced in the 1980s. In order to better regulate the water distribution among the Central Asian Republics, a system of water quotas for the two great rivers was established (see table). These limited the amount of water each republic was allowed to use.

Water quotas in the Aral Sea Basin. Note: Afghanistan was not included in the arrangement

In addition, two river basin agencies (BVOs, basseynovaya vodnkhozyaystvennaya organisatsiya) for the Amu Darya and Syr Darya under the central MinVodKhoz were established and started working in 1988. They were put in charge of the entire rivers, regardless of administrative boundaries among republics or provinces. However, Turkmenistan refused to hand over its water intake point of the Karakum Canal at the Amu Darya. In 1990, Moscow’s MinVodKhoz was closed down and replaced by a «State Trust of Water Works Construction» (VodStroi), but the Central Asian Republics’ MinVodKhozes continued to exist.

Thus, water governance prior to independence was hierarchically and centrally organized and based on a Soviet Union-wide approach. It was a purely state-managed system without any economic mechanisms or stakeholder participation. It proved to be inefficient and was marked by wasteful usage patterns. The overuse of water led to a de facto scarcity of water in some regions, especially in the lower reaches of the rivers.[O’Hara 2000, Sehring 2002.] 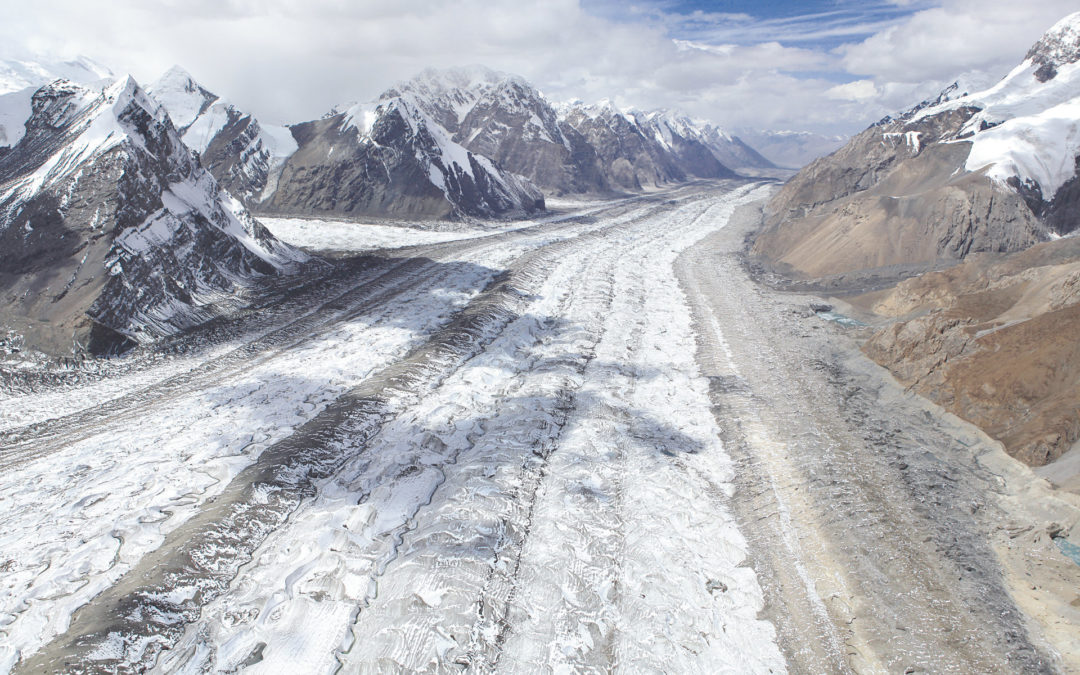 This picture was taken in the high mountains of the Tian-Shan near the South camp of mount Khan Tengri in Kazakhstan/Kyrgyzstan on board of a helicopter at an altitude of 5.500 meters. You see the Inylcheck glacier flowing West.

Settlements located downstream along larger rivers will be less affected by glacier melting. Glacier retreat will enhance river discharge and fresh water availability of the main receiving streams. In conclusion in coming decades we will observe a shrinkage of summer runoff from catchments with small glaciers and increase of summer runoff from catchments with large glaciers. As a result migration from mountain areas into riverine settlements will be the consequence. Further urbanisation can be expected. 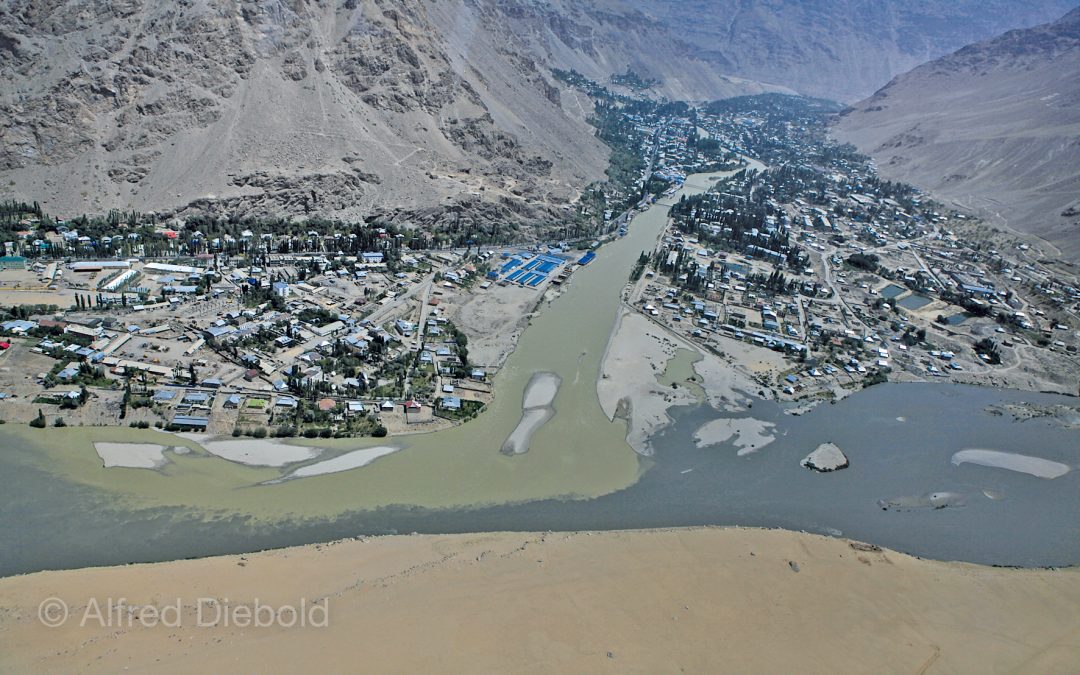 The river Panj as a natural boarder

This picture was taken on board of a helicopter showing the town of Khorog. The river Panj is the natural boarder between Afghanistan and Tajikistan. Modern Khorog is one of the poorest areas of Tajikistan, with the charitable organization Aga Khan Foundation providing almost the only source of cash income. However, the city does have its own university (Khorog State University), founded in 1992), twelve schools, and several hospitals. There is a museum, the Khorog Regional Museum, an Ismaili Centre, and the second-highest botanical garden in the world, the Pamir Botanical Garden. 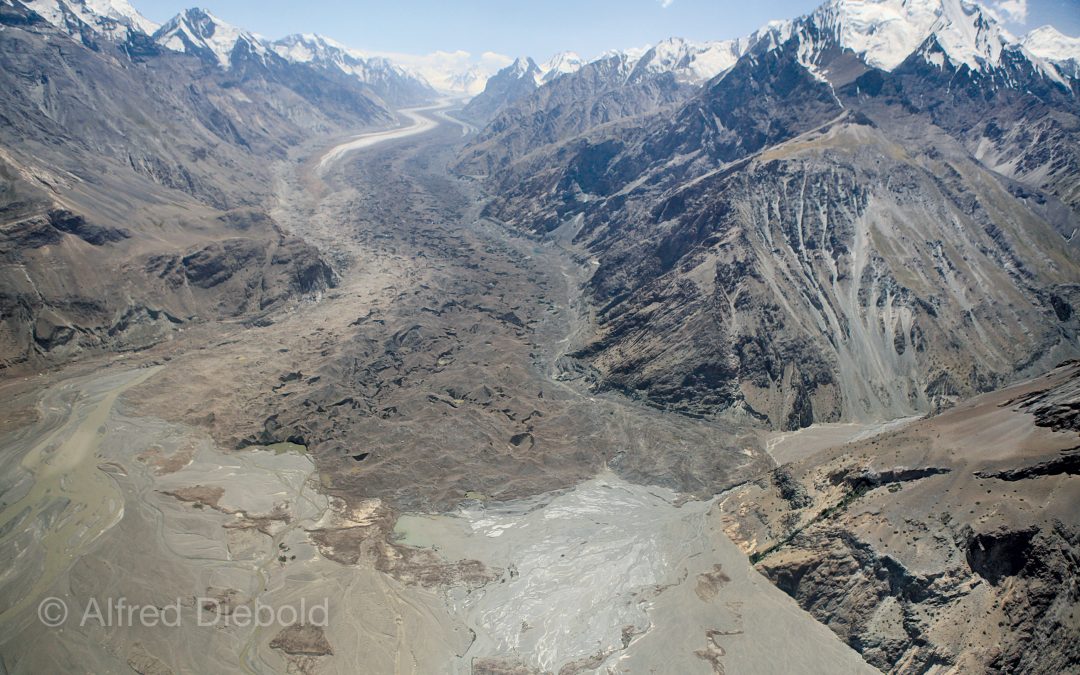 The impact of meltwater

The cryosphere system of the mountainous regions also include ice-rich permafrost as well as buired remnant ice in moraines. Changes in the permafrost thermal regime can have significant impacts on local hydrology, land surface energy and moisture balances, carbon exchange between the land and the atmosphere, and ecosystems, as well as on engineering infrastructure. With rising temperatures in the high mountains, it is expected that meltwater from buried ice in the frozen ground will increase the river runnoff.

More cooperation for better results! One country in Central Asia should not benefit on the cost of another, therefore a unified approach for using water resources should ensure sustainable development with a maximum welfare for the people in the region.